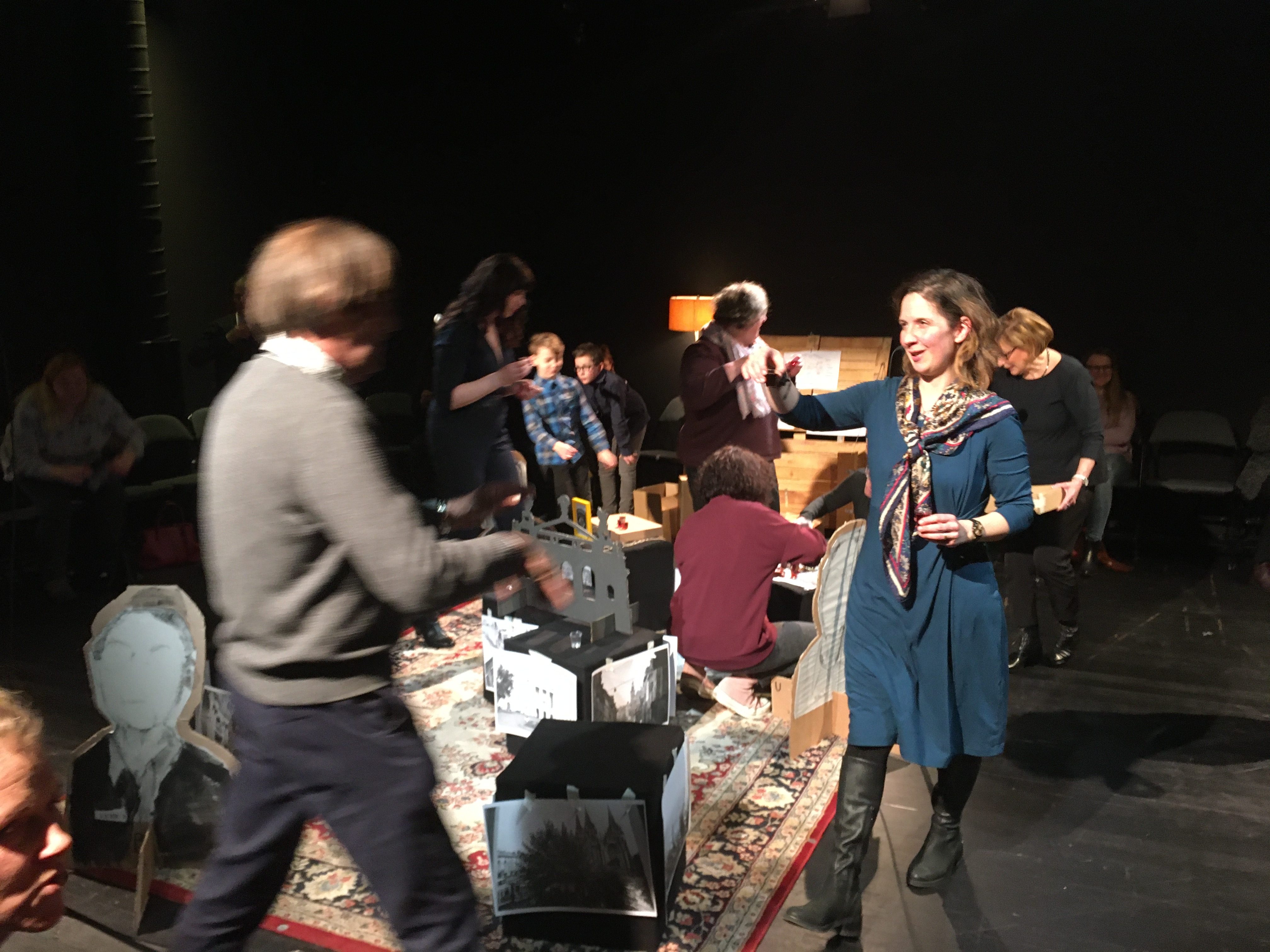 Borderlands - identity, diversity, community: now, before and after
A collaboration between Futur3, Teatr Lesja Ukrajinka and Neue Bühne Senftenberg.

Borderlands deals with life in two places near the border: Senftenberg/BRD and Liviv/Ukraine. What is the history, the future, the hope in these places? What do the people who live and lived there think about their lives?

The first production celebrated its double premiere in both cities in February 2020. "From Germany/Ukraine with Love" was developed together with people in Senftenberg and Lviv. By means of letters, objects or media, social self-portrayals were created, which were sent as a package to the audience of the respective other city. Who are we in the mirror of others on the other side of the border when we take communication into our own hands?

From Germany with Love

Did you ever hear of Senftenberg, Germany? No? Don't worry, you will get a chance to come to know the citizens of this little city between Dresden and Berlin! They will send you a parcel, filled with traces from their life's in Brandenburg, which is one of the big coal mining areas in Germany - and things are changing very quickly there. In FROM GERMANY WITH LOVE you will meet a young woman born in this town, who left the city, went to Australia to become a patissiere and then came back to open up the city's best café. Or the old director of a coal mine and the miners choir - that will vanish in the 10 years to come, as all its members are 80+ - but you will listen to one of their favourite songs. You will also meet two very bright boys age 10 and their hobbies. And a social worker, a young mother and teacher and some more. You will eat and drink what the people from Senftenberg love... and in the end you will know them a little bit, the inhabitants of a little city 1500km away - and their sorrows and joys.

From Ukraine with Love

Have you ever been to Ukraine? Have you heard of the old Galician provincial capital of Lviv? No? Don't worry, you'll get a unique chance to get to know this exciting city and its inhabitants! Because they will send you a package filled with stories, objects and traces of their lives. In FROM UKRAINE WITH LOVE, Lviv schoolchildren will tell you about their dreams. You will get to know a Crimean Tatar who had to leave his homeland due to the Russian annexation and found a second home in Lviv - the birthplace of Leopold von Sacher-Masoch, by the way. You will understand why a human rights activist attests to the puritanical schizophrenia of the Lviv population. Or how a Russian fashion designer found her love and life's happiness in perhaps the most patriotic city in Ukraine. You will also meet a former homeless man who is now pursuing his dream job. And an entrepreneur, a Maidan activist and a front-line returnee. You will hear the music and nibble on the things that warm the hearts of Lvivians. And in the end, you may know more about the people who live 1500km away from you in a country that is experiencing one upheaval after another.

From GERMANY with love
(Teatr Lesi, Lviv)
"We are not sure whether such a participatory performance would work for us," we heard our colleagues from Teatr Lesi say. But they were curious and brave enough to enter the double-pass game with us and the Neue Bühne Senftenberg. And their courage paid off. The first performances of "From Germany with Love" were overwhelming. Wild discussions were followed by thoughtful stories from the audience. We were touched and happy and thank the whole "Komanда" from the театр Лесі for their trust.
"This performance is so important for Lviv. People must finally be brought out of their hiding and show their colours. What do you think? What do you want? That's what's happening with your performance. Thank you!" (Audience member after "From Germany with love")

From UKRAINE with love
(new stage Senftenberg)
"The Senftenberger doesn't come out of his shell like that." was the comment at the conception rehearsal at the neue Bühne Senftenberg. Not so! The first performances were a celebration. There was discussion, laughter, singing and crying, and unusual information was shared. Who had it on their radar that coal conveyor belts were transported from Lusatia to Ukraine as reparations after the Second World War? The audience are clearly the experts in this production, and get to know not only people from Lviv, but also themselves.
"I experienced such a shoot during the performance. At the beginning I was completely with the people from Ukraine and their stories. Then suddenly all the other audience members were in focus. I think we all experienced something special here together." (Spectator after "From Ukraine with Love")

A joint project by Futur3, neue Bühne Senftenberg and Teatr Lesja Ukrajinka from Lviv.
Funded by the Fonds Doppelpass of the Federal Cultural Foundation.